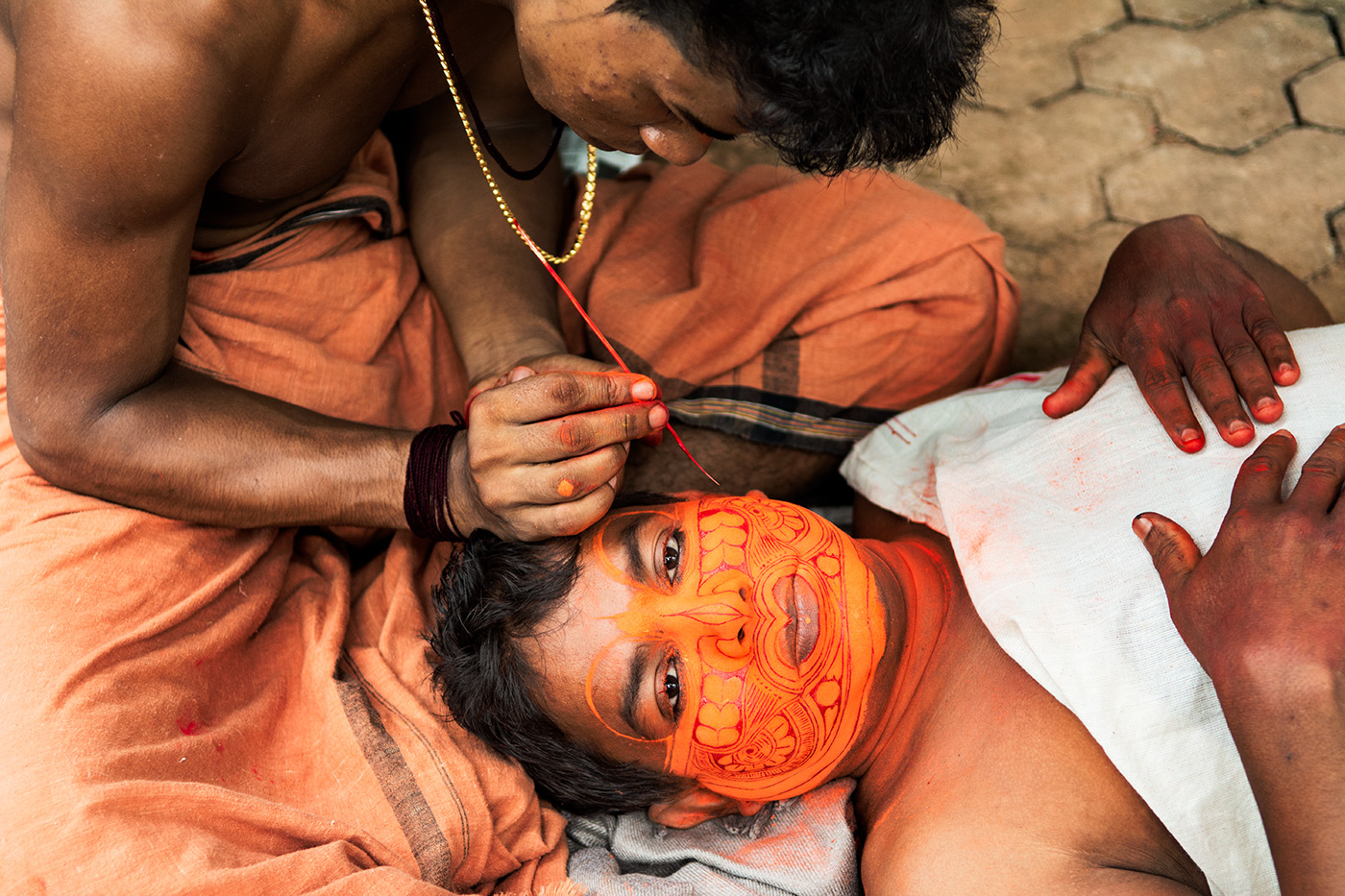 Theyyam is an ancient Hindu tradition, specific to the Malabar region of Northern Kerala in India. During Theyyam, stories of the gods are interpreted by skilled performers who are believed to embody the spirits of the deities. Theyyam artists undergo rigorous physical and mental training before taking part in these mysterious nocturnal rituals involving dance, music, elaborate costumes, and fire.

Our driver AJ indicates a narrow path, lit intermittently with bright fluorescent tubes and lined on both sides by thick jungle undergrowth. As we make our way in silence down the dirt track, the faint drumming we could hear from the road becomes more distinct. Tucked away beneath the trees, a modest temple comes into view, adorned with flower garlands and strings of coloured lights. The temple sits on a raised platform, with several square shrines around it. Women and children gather on one side of the compound, men on the other.

A blue tarpaulin hangs loosely from the trees, set back from the temple. The ground below is strewn with coconut leaves. It is here that the Theyyam performers prepare for their transformation, supported by a team of assistants and apprentices. 'Face-writing' is an integral part of a Theyyam artist's metamorphosis from mortal to deity. The intricate make-up completely masks the human face, taking several hours of artistry to apply. After the base layer of scarlet and orange has been completed, symbolic details are added in black, with a fine quill made from a coconut stem.

The Theyyam artists are in a trance when they begin their ritual performances. The Oracle, or 'Revealer of Light' leads a hypnotic dance around the fire, accompanied by pulsating drums. As the Theyyams circle the temple compound, surveying the audience, the flames burn with increased vigour. The atmosphere is edgy and intense.

The god Pulliyoor Kannan dances elegantly, his heavy ankle bracelets accentuating the rhythmic drumming. Gulikan is an unpredictable god - sometimes angry, sometimes benevolent, often playing tricks. His distinctive costume comprises a tall headpiece fashioned from coconut fronds, and a mask with large, round eyes. The fire torches on Puthiya Bhagavathi's headdress and skirt are ablaze. Kandanar Kelan, the warrior god, is perhaps the most dramatic of the Theyyams. As he leaps through the flames of a raging fire, red-hot ash flies into the air. The drums, the heat, the shouting and jostling of the agitated crowd all contribute to an intoxicating atmosphere.

At first light, devotees approach the exhausted Theyyams to make offerings and receive a personal blessing. A few smudges of black soot on Kandanar Kelan's face and body are the only visible signs of his nocturnal dance with fire.